During the communist dictatorship of Enver Hoxha, religion of all types were banned throughout Albania. Forced to adhere to a doctrine of state atheism, the freedom to worship was no longer a choice. For almost fifty years, many simple decisions were taken away. Communism fell in the nineties, and Albania has been struggling to recover ever since. Religion is just one of the small changes that has occurred since then. What used to be a forced 100% atheist population, has now fallen to just 2.5%.  Communist rule has had a profound effect on Albania and growth of the people here. Understanding more about their history, provides many answers to how and why things happen the way they. Which is why, I understood the undeniable air of excitement and pride among the Albanian people, as Pope Francis announced his visit to the capital of Tirana.

Every single billboard and sign had been changed to advertise the Pope’s visit.

Under the communist rule, all churches and mosques were taken over by the state and by 1990, around 95% of religious buildings had been destroyed or converted into other uses, such as cinemas and warehouses. Nearly 2,000 Catholic and Orthodox churches were destroyed. More than 100 Catholic priests and bishops were executed or died under torture or in labor camps. The main streets of Tirana, were decorated with these individuals portraits for the Pope’s visit. It was an appropriate tribute to these fallen religious leaders who were wrongly executed many years ago. 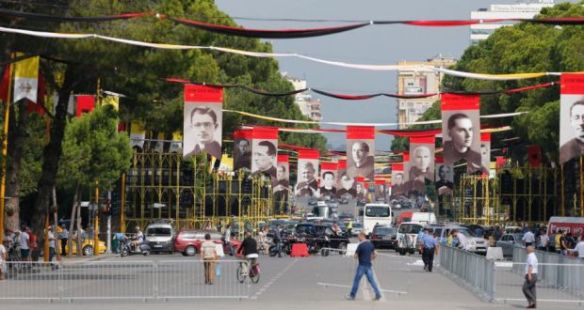 According to a census three years ago, muslims make up about 59 percent of Albania’s population, with Catholics amounting to 10 percent and Orthodox Christians just under that. Regardless of their practicing religion, the turnout for the pope was impressive. With over 300,000 people making the trip to Tirana, the streets were more than crowded. Excited to have this opportunity, I met up with other volunteers to experience the chaos. 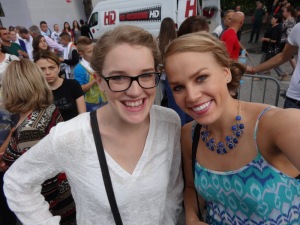 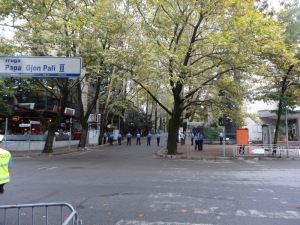 Security was tight, with over 2,500 policeman scattered throughout the square.

As we stood in the crowd, everyone was watching big screens set up throughout the area. As the Pope’s plane arrived in Tirana and touched ground, thunderous applause and cheers erupted. People stood and literally watched every single step Pope Francis made on his 11 hour trip. 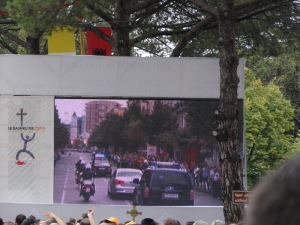 The high point of the Pope’s visit was the celebration of the Holy Sacrifice of the Mass in Mother Teresa Square, followed by the recitation of the Angelus. Countless people tried to squeeze into the square for Mass. Many reluctantly retreated to watch the screens instead. As I stood among some older Albanian women, they told me that one of them was sick. They had come because they were hoping the Pope would cure whatever illness she was suffering from. 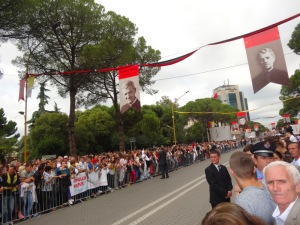 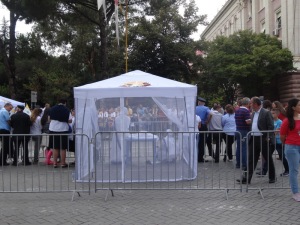 During his visit, Pope Francis denounced that extremists around the world are “perverting” religion to justify violence. He praised Albania, where Christians and Muslims endured brutal oppression under communism but now live and work peacefully together. To say Albania has come a long way would be an understatement. Not only is religious freedom encouraged, but there is a harmony among the people. This was showcased when Mass was attended by senior representatives of Albania’s Muslim, Orthodox and Bektashi groups. All of whom, were seated in places of honor in Mother Teresa square. Pope Francis reminded us that Albania should be praised, not only for it’s unquestionable improvement, but also for the grace that they have and continue to accompany these changes with. 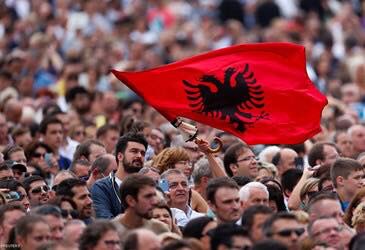