If there is one thing that volunteers get used to during PST, it is Power Points. Along with, being uncomfortable and confused for a good portion of those first few months. Or twenty seven months if we are being completely honest. But that is another subject all together, of which I could talk about until you were bored out of your mind. So, I will save that for another time…or times. 🙂

This last week we had two conferences back to back, which ended up taking up an entire week. I am happy to say I did learn quite a bit and I am glad that the staff took the time to put together their presentations. Our entire group stayed in a hotel on the edge of Tirana. The day I arrived it was pouring rain, windy and quite depressing outside. Also known as an Albanian winter. As I strode up to the hotel, the automatic glass doors opened for me and I peered inside. It was fancy, nice couches in the waiting area, a bar with waiters in uniforms and everything was clean. I stopped and stared like a lost puppy and almost picked up my phone to call another volunteer. I had to be in the wrong place, this isn’t Peace Corps accomodations. Just then, I spotted some people in my group sitting in the corner. Looks like our group was going to stay here for the entire week. My mood instantly changed as I thought about the luxuries we would be graced with that week. If you can’t tell, pleasing PCV’s is an easy task. Give us hot showers, heated rooms and some mediocre (free) food and we are happy. Anything on top of that is just a bonus to add on to our day. Not to mention that I got to room with two of my favorite people in Peace Corps. Which may have been more exciting than the hot showers! 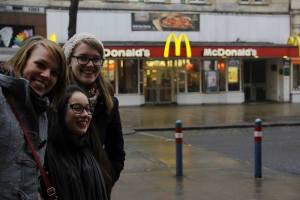 Emilie, Miranda and I in Vienna! 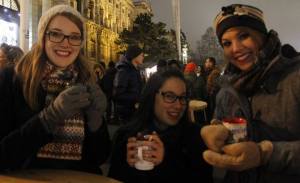 No surprise we are drinking or thinking about eating in both of these pictures!

The first three evenings of the conference were devoted to our LPI exams. These are twenty minute interviews that are held in the local languages and given to Peace Corps volunteers around the world. As I sat down to talk in shqip with one of the language teachers, feelings of fear began to creep into my mind. I shouldn’t let myself get nervous because it is exactly like going out for a coffee with anyone in Permet. However, all volunteers put pressure on themselves for these exams and I was no exception. I just wanted to improve and show the staff that I had been getting better and working on my language skills. For the next half hour I found myself talking about my Christmas trip, favorite food in Albania and of course, my upcoming birthday. We got our results back a few days later after two teachers had scored our interviews. I was happy to find out that I had increased a level from the end of PST! According to the results I can now communicate at an Intermediate High Level.

Intermediate-High speakers are able to converse with ease and confidence when dealing with most routine tasks and social situations of the Intermediate level. They are able to handle successfully many uncomplicated tasks and social situations requiring an exchange of basic information related to work, school, recreation, particular interests and areas of competence, though hesitation and errors may be evident.

Intermediate-High speakers handle the tasks pertaining to the Advanced level, but they are unable to sustain performance at that level over a variety of topics. With some consistency, speakers at the Intermediate High level narrate and describe in major time frames using connected discourse of paragraph length. However, their performance of these Advanced-level tasks will exhibit one or more features of breakdown, such as the failure to maintain the narration or description semantically or syntactically in the appropriate major time frame, the disintegration of connected discourse, the misuse of cohesive devises, a reduction in breadth and appropriateness of vocabulary, the failure to successfully circumlocute, or a significant amount of hesitation.

Intermediate-High speakers can generally be understood by native speakers unaccustomed to dealing with non-natives, although the dominant language is still evident (e.g. use of code-switching, false cognates, literal translations, etc.), and gaps in communication may occur. 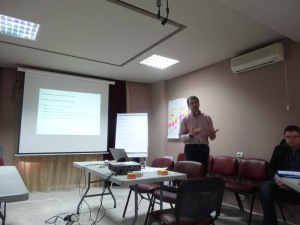 Genti is one of the best things about Peace Corps! 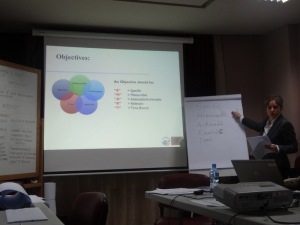 Our program manager, Darina. We are lucky to have her helping all health volunteers.

The second half of the week was a Program Designing Workshop. We all invited an Albanian coworker to attend the conference as well. The three days of the conference were broken down into simple steps on how to start and complete a project here in Albania. A few of the volunteers in our group were working with people that didn’t speak one word of English. Those few days were especially exhausting to them as they struggled to communicate, as well as plan a project. I had decided to invite the School Psychologist to this conference. My counterpart that I work with at the health center is a wonderful lady, however she only speaks shqip and we have struggled to accomplish anything thus far.  I felt extremely fortunate that Valmira had agreed to come to the conference with me!

Before coming to this workshop, we had not decided on a project idea yet. It is hard to know whether a project is too big or too small. I have plenty of ideas on things I would like to change here but whether they are attainable or not is the more important question. What kind of site you have also can make a big difference on what size of project you are able to accomplish. Valmira and I decided to shoot for a smaller project this time around. It will be our first time working together and the first project either of us have done in Albania. We are going to educate the middle and high schools in Permet on the bad effects of smoking.  Smoking is a huge problem here, you could compare it to the mentality of America in the fifties. I am hoping to do some sort of interactive presentation with each grade that gets through to them on what smoking will do to your health. May 31 is anti-smoking day in Albania so most of our project will take place around then.

PC and Albanians love certificates. But lets be honest, who doesn’t.

In the next few weeks there will be a new school director in the high school. The director that is currently in place is very supportive of Peace Corps and any projects we have wanted to start. I can only hope that the new director is the same way.  I had talked to Valmira about possibly doing a larger project next year in the schools. By that point we will have more experience under our belts which should add to our success. She simply replied that she would love to but she had no idea if she would still have her job next year. The lack of job security here still astounds me. With every similarity I see to the developed world, something happens to remind me of the fact that I am in Albania. Occasionally, it’s a good thing, but a lot of times it can put you in a somber mood. If you listen carefully to an Albanian saying avash, avash (slowly, slowly), a PCV could be heard uttering the same thing into your other ear. 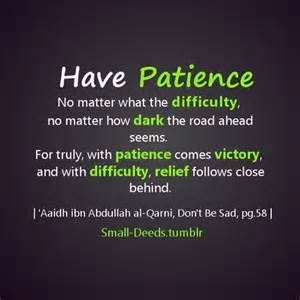