On Wednesday, my father and I flew to Italy. It was my first trip out of the country since arriving in Albania 9 months ago. I had been counting down the days since we had started planning this trip. There were so many things I was looking forward to. Some were drastically different than what it would have been like coming from America. My priorities, patience and views of the world have changed since becoming a PCV.  I began dreaming about first world cleanliness, service, infrastructure and heating, just to name a few.

An hour and a half after take off we had landed in Rome. I was in a state of disbelief that we were actually there. That’s how easy it was to get to Italy, literally a hop, skip and a jump away. Not a bad thing to have that close in case of a needed getaway. I had to pinch myself a few times while we were waiting for our baggage. It was a weird feeling to see so many tourists and people from a country other than Albania. It seemed as though my mind had forgotten about the rest of the world these past nine months. It extends past the veggie farmers and dyqan owners in Permet. Not going to lie, it was a great feeling to be reacquainted with the rest of the world. We ended up waiting for an hour and a half for our baggage. My mind floated directly into an “Avash avash” state, and I proceeded to be content with people watching. My patience has increased by leaps and bounds these past few months!

As we drove to our hotel, my first impressions of Rome was that it was a huge city. I was also extremely glad that I didn’t have to help navigate the roads here. That may have given me a heart attack after the past few days in Albania. That evening we went out to a cute little Italian restaurant. When we had finished the waiter came and asked if we wanted a second plate of pasta. That made  me chuckle, even though I gave it some serious thought. It’s a good thing I don’t live here, I would have trouble moderating my diet! 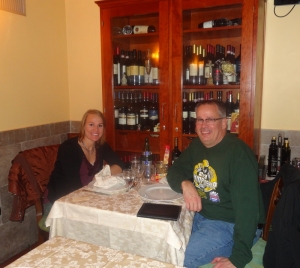 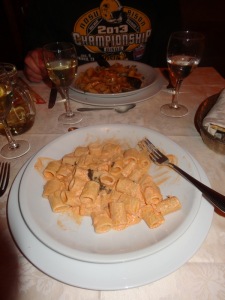 Thanksgiving day rolled around and I had a lot to be thankful for. First of all, I got to a take a hot shower, which was amazing!! In a heated room, which was equally, if not more amazing than the hot water. Then we had breakfast at the hotel, which was served buffet style. There was filter coffee, scrambled eggs, BACON, different cured meats, CHEESES, pastries, juices among other things. I was in heaven. What a perfect way to start off a Thanksgiving morning! 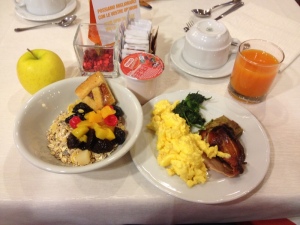 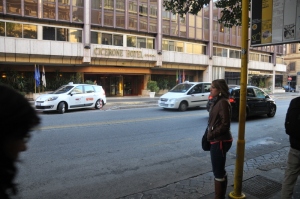 After breakfast we headed across town for the tours we booked that day.  In the morning we viewed the Coliseum, Roman Forum and Palatine Hill. It was such an amazing tour, and we lucked out with the guide we were given. She was so knowledgeable about the history and lives of the roman people. You could also hear the passion in her voice as she explained the games to you. I must say, the past of Rome, is a little freaky. Bloodshed was their entertainment. The Gladiators were like our modern day football players. They were the “stars” that the women swooned over. At the end of the day though, they were still slaves and sometimes they were literally fighting for their freedom. It’s one thing to read about it or watch movies about it. But to be there and see the massiveness of the stadium and the structure gave it a whole new meaning. 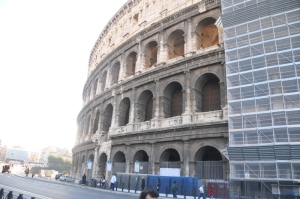 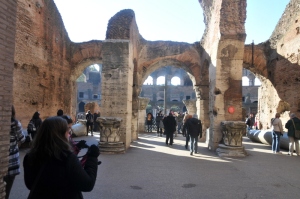 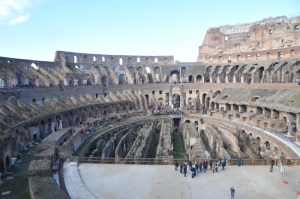 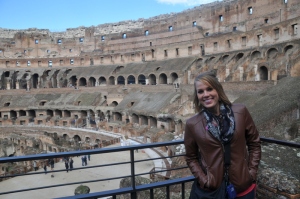 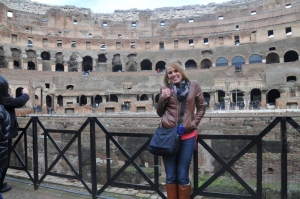 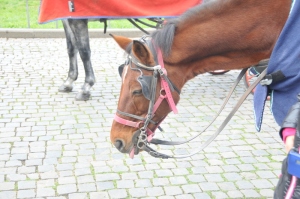 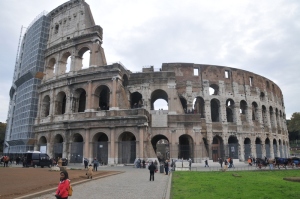 I did make a small error of judgment for this trip. Italy in November is COLD!! I don’t know what was going through my mind while I was packing. I have no excuse since I live less than two hours away. I was freezing for the entire tour of the roman ruins!! I wasn’t alone, apparently it was unseasonably cold for Rome at this time of year. Never again will I under-pack for a trip. Next time, my long underwear and wool socks are coming with me! 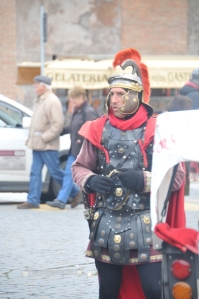 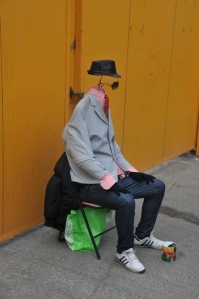 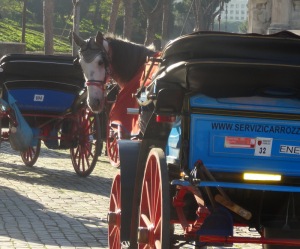 That afternoon we saw the Vatican, Sistine chapel and St. Peters Basillica church. Before our second tour we were able to grab lunch at a café across the street from the Vatican. It was exactly what I envision a lunch spot in Italy to be. There was one window of sandwiches to choose from, one window of a hot buffet and one window of desserts. My dad ordered the lasagna and I ordered salmon with soup. It was a perfect way to warm up a bit after our morning outside. We didn’t realize that the lasagna was over $20 a slice. The fish was over $25. Our cappuccinos were $10 a cup. We learned our lesson about asking prices before ordering. Especially when it sits in a very touristy location! 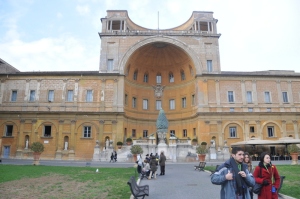 The Vatican was an amazing experience. I am so glad I was able to see that while we were in Rome. I would highly recommend going, you just cannot compare it to anything else. At least not in my experience. We barely scraped the tip of the iceberg though. There is so much history and art, it was a bit overwhelming. We lucked out by being able to have the same tour guide as we had at the Colosseum. She was even more passionate about the paintings and pieces at the Vatican. The amount of history she knew about each painting was incredible. I learned more about the ancient philosophers and artists than I ever did in school. She mentioned that if you were to stand in front of each piece of work in the Vatican for 1 minute, it would take you over twenty years. That gives you a little perspective on how may pieces there actually are. Pictures don’t quite do it justice. The ceilings and intricate detail were amazing.

We had supper at a quaint little restaurant. It was warm and the food was delicious. I think I finally tasted what spaghetti and meatballs is supposed to taste like! 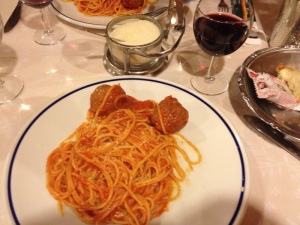 And they bring you a bowl full of Parmesan cheese. Yes, please!

A cute little cheese store in the heart of Rome.

A wall full of chocolate! 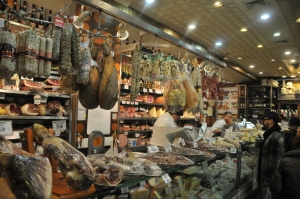 The next day, we woke up before 6 am and headed out of Rome with a tour company. On the agenda for the day was Naples and Pompeii. We were fortunate to have great weather and sun the whole day. It was a couple hour drive by bus before we arrived in Naples. Naples is the birthplace of Margarita pizza. Near the cities of Naples and Pompeii sits Mount Vesuvius. A volcano that erupted in 79 AD and covered the entire city of Pompeii. The city was buried for centuries and then was discovered in the 18th century. The last time it erupted was in 1944. 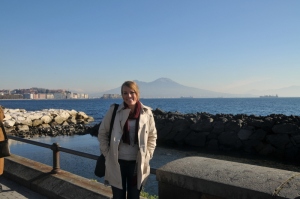 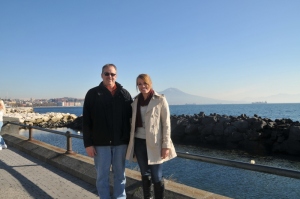 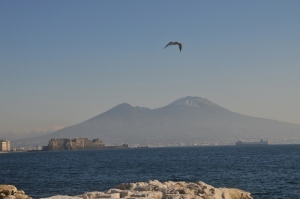 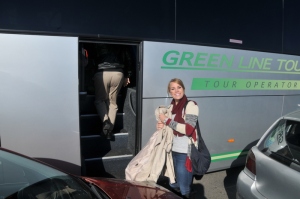 Our local guide met us in Naples and we toured the old part of the city for about an hour. His name was Frankie, and he was a spry 87 year old man. I think he was at the point in his life where he didn’t care if there were rules. This was his tour and we were going to follow right behind, in a quick and orderly fashion.

After our lunch we started our tour of the ruins of Pompeii. It was a larger and very organized city. Like I said, our guide, Frankie, was a very agile little man. You could tell he was very passionate about history, but in an old school teacher sort of way. If he didn’t think we were listening he would yell at us to stop talking. Followed by; “come on people, this way. ONLY my people in this tour. Green line tour only! My people only!! Nooooo freeloaders. If you’re talking while I am talking, I can’t think straight.” His comments provided constant entertainment for the group. Especially when he kept glancing confusing looks our way when we kept giggling. 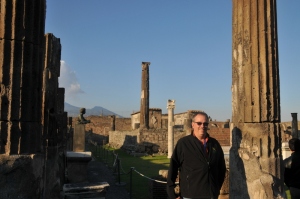 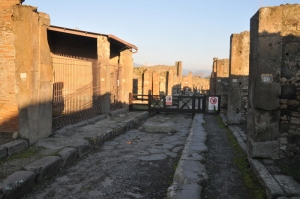 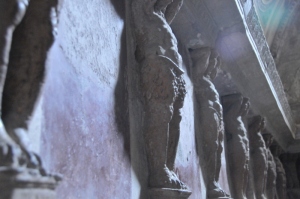 After we finished our tour of the city we headed back to Rome. Where I had my first taste of real gelato. Mamma Mia, was I in heaven! That may have been when I started falling in love with Italy!