A new fridge, bee attacks and being electrocuted. The good, the bad and the ugly. The last part of July has proven to be quite entertaining. And hot. Way too hot.

How I usually end up looking when I fall asleep…

I was warned that summer was going to be hot and I wasn’t quite sure what to expect. I don’t handle the heat very well…meaning I can get a tad irritable. BUT, I am trying to work on it. I am also working on not being crabby when I am hungry. They do say the PC is a time for growth and self development right? Albanian summers have shown me that you don’t have to exercise to sweat more than you thought humanly possible. I also never thought I would cuddle with ice packs at night, I guess there is a first time for everything. I am enjoying the time at the beach and soaking up the sun. However, I hate to say I am looking forward to cooler weather. I may be eating my words when I am shivering in my apt in a few months.

Until then, I am living in my swimsuit. 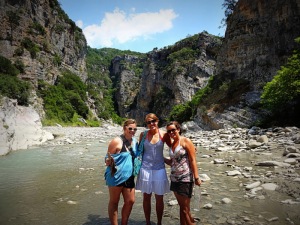 Best way to ward off the heat!

When I arrived at work Monday, my coworkers told me that they wanted new brochures about various health topics. We had a roundabout conversation as I tried to ask what they wanted to do with this information and who it was for. I am not sure either side got their point across. Sometimes, the most frustrating part of being here is feeling like you can never understand or explain yourself. It is hard to continually be patient with yourself. The same goes for any Albanian that is trying to understand my broken shqip. The heat, and the confusion had started to put my coworkers and I on edge. We decided to get out of the office and hang up some health posters around town. As we were hanging up the first poster we accidentally discovered a bee hive. The bees were not happy about our posters.

Numerous bee stings on Monday morning was not the ideal way to start the week! Those suckers hurt!! 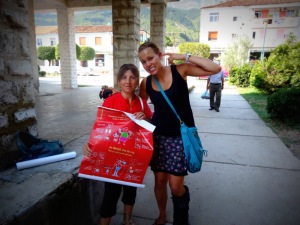 The fiasco that followed as we ran away and tried to take cover turned out to be a blessing in disguise. We were able to laugh at each other and somehow, that got rid of our bad moods. Seemingly bad situations here can have a way of turning themselves around. 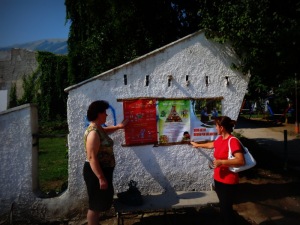 Tuesday, I found myself getting suckered into a coffee break with my coworkers son and daughter. At work, they know that I want to go back to grad school to become a Physical Therapist. In their eyes, this means that I am already a qualified PT and I should practice that here. They wanted me to look at their son’s knee and tell them what was wrong with it because they didn’t believe the doctor. My shqip skills are definitely improving in the area of explaining that I am not a doctor, PT or someone qualified to diagnose or treat anyone living here. I don’t think they believe me though. Part of that has to do with the differences in culture and the corruption. Diplomas are almost always paid for and you don’t necessarily earn your grades, you pay for them. Unless you are part of the winning political party then you are not going to get a job. Qualifications are not the first thing looked at here, or taken into consideration at all.

I have been proud of the few things I have been able to fix here all by myself. Well, lesson learned. I do NOT know how to fix a fridge. Tuesday, the hottest day of the week, my fridge quit working. I decided that I would try to monkey around with a few things and see if I could snap it back on. First of all, always unplug the fridge when you are sticking your fingers back where there might be wires. In my defense, it was literally 99 degrees outside and I was not thinking straight. I ended up electrocuting myself and I took that as a good indicator that I had no idea what I was doing. After having a very confusing conversation with my landlord, I ended up calling a group 15er to help translate. By the end of the night I had a new fridge sitting in my kitchen. A normal sized fridge too, no more of that dorm size nonsense! It even has a light in it. Things are getting fancy in Permet!

Gazpacho! Now that I have room in my fridge for leftovers, I can cook!

Another highlight of the week was making sushi with my sitemate. So delicious and easy to make here. Seawood Nori would be a much appreciated gift sent from the states! 😉 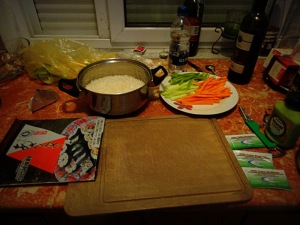 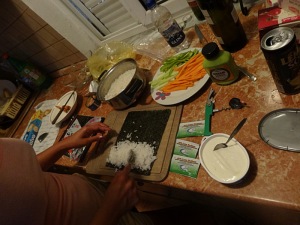 One evening I found myself in the exact scene I had thought of when I joined the PC. I was surrounded by happy PCV’s sitting around a bon fire while a fellow PCV played a ukulele and sang. Can’t get more Peace Corps-ish than that. It was a great time and made even better by the american marshmallows we were able to roast. Thanks Pops!

My first summer living here has been full of small bumps in the road. Almost everything in my apt has broken once. I have tried to fix them all, succeeded a few times and probably broke some of it more than when I started. I have felt like I was literally being baked from the inside out by the Albanian sun. And on those days, I have spent more than 8 hours sitting in a furgon. An infinite number of conversations have been lost in translation. As well as countless people that have screamed AMERICA at me as I walk down the street. I would be lying if I said I don’t get frustrated with life here every now and then. However, I have found that a good attitude can make or break your day when you run into these issues. I am trying to remember that whenever I run into an obstacle here or start to get frustrated. It’s not rocket science but, sometimes it’s harder than it sounds. A good lesson to learn while I am still young and something invaluable that I can bring back with me to AMERICA!

And if that doesn’t work…